What the what?: Questions from grading jail

Posted by The Steel Magnolia at 8:25 AM 5 comments:

I now interrupt my feverish grading and overworked body and mind to bring you this message:

Who's idea was it to put bacon in between two pieces of chicken and call it a sandwich? I was already upset that KFC was sticking a hunk of meat in a cup and acting like it was a snack. Now they have two hunks of meat acting as bread? What the . . . !

I now return to my regular semester-end program, already in progress.
Posted by The Diva at 11:05 PM 4 comments:

One Thing I Hate About You

Yes, you. Lady sitting in front of us at church. The church that we were visiting. Where we should have been made to feel welcome. I find you annoying, lady. I know that you would say that you found us annoying, but here's the thing about that: I don't care. Yes, my children were a little too loud a couple of times, and once or twice they were too exhuberant in their play. But they were playing with two other children, and their father was sitting right beside them. Why didn't you look at him with your judgemental, annoyed, and squinty look? And didn't you know that I saw you looking directly in my face the first time you looked at me? I smiled because I didn't know what your problem was. Then you told the children to be quiet. I had already spoken to them, thank you very much. It was loud in this warehouse of a church, so their noise was minimal. But even if they were completely "cutting a fool" one half-turn to the back is enough to let me know that you were disturbed. I didn't need 3, 4, 5 pissy looks in my direction, especially since your own two boys were turned around in their seats, hanging over their chairs and dangling their arms in our space. Even if I were a terrible mother (which I'm not) with uncontrollable children (which they are not), I didn't ask for your advice, so please don't offer it in the form of glares. Next time, I'd thank you to simple take your ample behind to another seat. Perhaps one where you can pay more attention to the service and less attention to my children. And God bless you, too.
Posted by The Steel Magnolia at 11:32 AM 4 comments:

I stumbled on the 1980s film Breakin' today. I loved that movie! I thought it was awesome when I saw it in the theater. I started calling myself Special K like the girl in the who joined the Ozone and Turbo dance crew. Watching it today, well . . . not so much. While the dancing still seemed pretty cool, the acting was some of the worst I've ever seen. I mean ever. The writing was trite. The plot was silly. But it still felt exciting to watch it. Go figure.

At the end the group goes to a hoity-toity audition where they are denied entrance. They won't waste their time on "street dancers" the judges say. Then Ozone announces they his group will be dancing next. They rip off the sleeves of their coats and walk aggressively onto the stage, staring the judges in the eyes. "What are you people doing? You can't just come out here! We told you to leave!" the judges exclaim. But then they start to dance (don't know where the music came from) and suddenly the judges can't help themselves. They are so good that they can't be denied.

It dawns on me that maybe this is where the people who audition for "American Idol" get the idea that they should ignore the judges when they tell them to take a hike. It's such a feel-good moment in the movie. I'm sure this isn't the only cinematic example of this, but that's my big epiphany for today. So there you go.
Posted by The Steel Magnolia at 4:04 PM 2 comments: 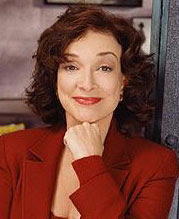 So sad to hear that Dixie Carter has died. I always liked to think of myself as Julia Sugarbaker, bold, sure, righteous, smart. I can probably still quote more of her lines than any other character on the show. In truth, I'm probably more like "Designing Women"'s Mary Jo, who was more mousy, timid, and quietly confident. Still, Julia was the woman I was in my mind; you know, after the moment when you should be telling someone off but instead stand there with your mouth open in disgust. Carter gave her such life and spirit. And sex appeal! She, and Julia, exemplified the real steel in steel magnolia. In fact, as I remember it Carter has brought that kind of joy and sass to every role from Mr. Drummand's girlfriend on "Diff 'rent Strokes" to another sassy Southerner on "Filthy Rich" to the lawyer on "Family Law."
Important, too, was the lasting and loving relationship between Carter and her husband Hal Holbrook, who also appeared on "Designing Women." I loved watching them feed off of each other's energy. He described her death as a tragedy.
I know that actors don't like to be pigeon-holed in their roles, but I have to say, "Thank you, Julia Sugarbaker" for making me laugh and put a little extra switch in my hips.
Posted by The Steel Magnolia at 1:05 AM 1 comment:

Posted by The Steel Magnolia at 9:47 PM 2 comments:

So, I had an ob-gyn appointment today. When I returned home, I told Hubby that we needed to talk. He took one look at my face and asked, "You're pregnant?"

I nodded. "How do you feel about that?" I asked.

"Well, you know I've been dead tired for weeks."

"Yeah. And you look a little heavier." He points to my stomach.

I look at him, blank.

"April fool. Thanks a lot." This was not nearly as funny as I planned.
Posted by The Steel Magnolia at 7:53 PM 3 comments: