I have really been M.I.A. lately. I'm still here. Popcorn has been sick and I have been trying to take care of her while making frequent trips to see doctors. Because she was born so early and was on a ventilator for so long, she has chronic lung disease. These factors make her more susceptible to illnesses such as the flu and the common cold. Well, she doesn't have the flu--thank God--but we're not sure if she has a cold, RSV, or a flare up of the lung disease. In any case, she is quite congested and has a truckload of medicines to take. I am grateful, however, that she doesn't seem to feel bad. She has been playing and kicking and "talking" up a storm.

So, I'll be back when I can get a longer moment to write. I wanted to comment on Kanye West's behavior and Patrick Swayze's death when they happened. I still might do so later.
Posted by The Diva at 2:28 PM 2 comments:

Thanks for the time of my life 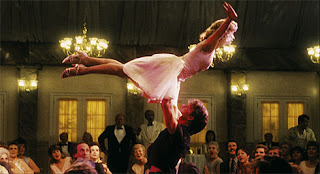 Oh my. Just watched the Patrick Swayze tribute on "Dancing with the Stars" and I'm so moved by so much beautiful artistry and creativity. They recreated the fabulous last seen from "Dirty Dancing" and--oh my. Sad and joyful and full of life, all at the same time. Boy, I wish I could dance.
Posted by The Steel Magnolia at 8:05 PM 1 comment:

I question myself as a mother. A lot. Did we pick the right pre-school? Is her outfit cute enough? Am I giving them enough spiritual guidance? Am I giving them too much ice cream? Right about now, though, I'm feeling pretty good about one particular parenting choice.


I almost named my son Kanye.


We originally wanted a K name, and Kanye had a nice ethnic, original sound and meaning without being weird. Ultimately, we figured that it was just too dangerous to choose a rapper's name. I didn't want to explain for the rest of his life that, no, he was not named after West. After Kanye's ridiculous outburst at the VMAs, he can have that name all to himself.

For those who didn't watch because they don't care (like me), West appeared out of nowhere on stage when Taylor Swift was receiving her award for Best Female Video, snatched the microphone, and basically said that Beyonce should have won. Now I'm no big Beyonce fan either, but I'll give it to her; when she accepted another award later, she yielded her time to Swift so that she could have her moment. That was classy and compassionate. There was no reason for West to steal Swift's shine. Remember that line about opening your mouth and removing all doubt that you're a fool? Nobody asked for his opinion. He didn't need to defend Beyonce's honor. I assume that he didn't have anything specific against Taylor Swift. He's just a buttwipe and everybody seems to agree. Plus, I like that song.


It's a little disappointing to me that he's so unlikeable because his music is interesting. And, truthfully, I just wanted to like him because his mother was an English professor.


Alas, that dream is over. He's a buttwipe. Good luck with that.
Posted by The Steel Magnolia at 9:19 AM 2 comments:

First Time for Everything

There's a first time for everything, right? Today marked: