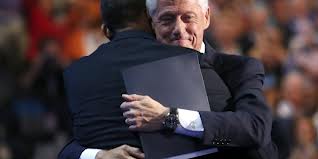 I always knew that Bill Clinton was problematic. With his welfare reform and Three Strikes law, I could hardly say he was the best friend a black girl could have. But I still loved him. In spite of his philandering ways (which I've come to expect of powerful men anyway), I still loved him.  He was an intelligent, down-to-earth Southern man who could play a mean saxophone. He chose to love a woman who was just as intelligent and ambitious as he was.  And he had so much swagger. How could I not love him?

Then in 2008, the Democratic Primary happened, and I fell out of love.  The way they ran Hilary's campaign--with the not-so-veiled racist attacks on Obama's character among other actions--was disappointing and heartbreaking. I know Bill was fighting for that intelligent and ambitious woman he chose, and that fact deserves a measure of respect, but they could've fought differently.  And even after Obama was chosen and won, clearly, there was still bad blood that reared up in Bill's discourse from time to time which reminded me of my initial heartbreak.

But last night at the Democratic National Convention. . . . It was like when you run into an old boyfriend on the street and he's looking really good and he says he's missed you. For the life of you, you can't remember why y'all had to break up in the first place.  So you accept his invitation for drinks and after.  And the next morning, you know you won't get back together, but it was really good to see him again.

Bill's speech was amazing!  It was substantive, it was clear, it was witty, it was forceful where it needed to be.  It laid it out plain for regular folk.  He did the darned thang!

Last night wasn't enough to make me fall back in love, but it sure was good to see him again.
Posted by The Diva at 11:55 AM No comments: